Exhibition of the Museum of Blue Dyeing 13/Nov/2007 - 16/Mar/2008
When, in the 1960s, blue jeans first appeared in Hungary as a fashion item, they no longer served their classic function as the work clothes of the masses. Because they were so hard to obtain, jeans long remained a "prestige item," and were slower to be picked up by and to gain popularity with Hungary's rural youth than was the case in urban circles.

Though at the time, jeans were difficult to adapt to generally held views on the topic of dress, in the decades to come, their social acceptability would increase until they became a decisive part not only of the dress of various group cultures, but also of the casual wear of the general public. Though jeans have been manufactured in Hungary since the 1970s, consumer focus on brand name products (such as Levi's, Super Rifle, Lee Cooper, and Wrangler) has prompted Hungarian manufacturers to pursue the licenses necessary to assemble these products. Buda-Flax, for example, would eventually produce not only Trapper, but also Lee Cooper; the 1 May Clothing Factory would produce Levi's; and, starting in 1985, Interfer began turning out jeans under the Wrangler brand name.

The range of garment types has also expanded to include not only trousers and jackets, but also skirts, bags, and caps. The 1980s in Hungary was a time of proliferation of both colour and form, when period names based on various styles, colours, degrees of wear, and decorative forms entered everyday vocabulary on a regular basis: the distressed period, the colour (and especially the red) period, and the chequered and striped period are typical examples.


The jeans boom of the 1990s, which endures to this day, is a product of mounting consumer culture, the liberalisation of standards of dress, changes in the gender and age of the average jeans wearer, and the introduction of new standards of living. The perpetually changing fashions of the 21st century have produced a broad range of styles, including worn and ragged, batiked, patched, and embroidered jeans, jeans decorated with beads, sequins, and lace, jeans with anything from bell bottoms to peg legs, jeans with button flies, low-rise jeans, jeans with cuffs folded up to reveal the ankles, and jeans with legs that virtually scrape the floor. Today, the arena is shared by an incredible variety of styles, a selection made even richer by the presence of the used clothing industry - still in its golden age in Hungary - from which long-forgotten styles often resurface. 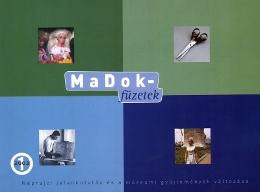