More Than a Neighbor

Mosaic Images of Croatian Folk Culture 11/Sep/2013 - 23/Mar/2014
The Museum of Ethnography's More Than a Neighbor - Mosaic Images of Croatian Folk Culture celebrates the accession to the European Union of a nation to which Hungary has numerous historical ties - some stemming from events that are a source of mutual national pride, and others founded on matters that are viewed quite differently in the two countries.


Rather than focusing on modern-day Croatia, the exhibition uses 19th-century artefacts to explore how certain European processes have influenced the development of folk culture. The Hungarian visitor will find this material familiar, as it is the view of ethnographers in both countries that the Drava River - currently the national boundary between them - has never constituted a sharp cultural dividing line.

Hungary and Croatia are bound by more than eight hundred years of shared government, as well as by labour migration, shared sites of pilgrimage, and the familial ties of numerous landowning families; and of course, there are Croatian groups still living in Hungary today and a substantial tourist industry, as well. By offering an interpretation of a collection of artefacts acquired between 1872 and 1920, the museum hopes - among other things - to demonstrate that the ethnographic image that is still a part of the Croatian national identity today was, in many cases, shaped across common scientific forums. 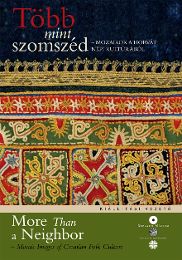