This scarf from the holdings of the Museum of Ethnography is both a fresh acquisition - having come to the institution in mid-September from the Hungarian-Serbian border area near Ásotthalom - and one associated that is with a topic now fresh on people's minds. Until recently, the Hungarian-Serbian "green border" was one of the most heavily trafficked crossing points for people - primarily refugees of war - migrating from their homes to Western Europe. So, how does a scarf belonging to a historic event that is still underway come to be collected - even put on display - so soon after the fact? What can be deduced about the scarf's history, and what questions does it pose regarding the here and now?

In decidedly deteriorated condition, the black-and-grey patterned scarf was found cuaght on the pointed barbs of the boundary fence that stretches along several kilometers of the Hungarian border. As we have no idea who it originally belonged to, as a scientific find, we can say only that it was likely left behind in the process of crossing the border, that it is machine-made of silk and semi-sythetic fibres (viscose), that it was originally secured to the head with one or more safety pins, and that its owner was probably a Muslim woman. The scarf's length and character suggest that it was worn as an Islamic hijab for the purpose of covering the hair, neck, and chest in the manner commonly seen in Western Asia and North Africa. The Koran does not actually elaborate on how those of the Islamic faith are to clothe themselves, specifying only that both sexes should dress modestly. In broader terms, the word hijab, used as a synonym for "scarf", represents the totality of proper dress, behaviour, and communication between men and women; within the text of the Koran, the word refers to separation, covering, and concealment in both the concrete and figurative senses. In the view of most scholars of religion, Muslim men are to cover the region between their navels and knees, while Muslim women must conceal all parts of their bodies but their faces and hands. At the same time, it can also be said that the use of headscarves and veils, which trace their beginnings to pre-Islamic times, depends primarily on factors associated with the culture in question, such as the type of cloth involved, prevailing styles of dress, and what specifically is meant to be expressed, whether it be the age of the wearer, family status, or precise ethnic or religious identity.

Although for the time being, such details remain unknown with regard to this particular scarf, the find's status as part of a contemporary phenomenon gives us the opportunity of seeking a modern take on it: might women who wear similar scarves tell us, based on the scarf's defining characteristics, what area of the world it came from; where its wearer originated; how she wore it and what things it signified; or whether its loss and her subsequently uncovered head and hair would have been tantamount to nudity in her eyes? Might we also discover what the loss of a scarf means to a Muslim woman during a crisis situation in which she is fleeing over restricted borders; how she is affected by the state of being uncovered; what might substitute for the scarf; whether on a such long and trying journey it is possible to carry more than one scarf; what constitute the most necessary and important personal items that a woman would not do without; and what articles would almost certainly be left behind?

Though as a museum piece, the personal aspects and - from the European perspective - otherness of this scarf - what it meant within the environment where it was originally used - have yet to be explored, its meaning within the context of the present and immediate future is indisputable: it is an object capable of invoking dimensions of memory that go beyond mere historical and documentary value. In fact, this Muslim woman's scarf constitutes a witness to the act of changing locations for a prolonged period of time - to the phenomenon of migration - and within that context, to the invisible, dehumanised, often only numerically expressed act of fleeing from imminent danger. Such an object has the power to bring the viewer closer to an event that is determining the fates of so many individuals of the 21st century, to illuminate it from its most elemental vantage point, and to facilitate understanding. Regarded primarily as trash, objects left along the border - torn trousers and other articles of clothing, worn shoes, plastic water bottles purchased in all manner of different countries, energy drink cans and cigarette packs, crumpled tickets, torn documents, business cards, slips of paper bearing addresses, etc. - constitute the solitary physical manifestations of a transitional and virtually invisible cultural and social phenomenon. 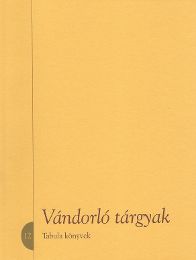