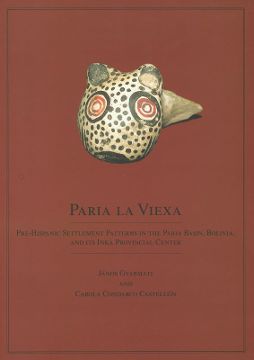 Pre-Hispanic Settlement Patterns in the Paria Basin, Bolivia, and its Inka Provincial Center

This product was added to the Cart.

The book summarizes the results of the Paria Archaeological Project conducted between 2004 and 2011. The main goal of the project was to gain a better understanding of the settlement patterns in the Paria Basin from the Formative Period to the Colonial Period. One of the priorities was to learn more about the role of Paria, the Inka Period provincial center, in the region's life and its connection with the Cochabamba Valley as well as about the other similar provincial centers and their role in the administration and economy of the Inka Empire. The systematic survey and mapping of Paria showed that it covered a total of 110 hectares and had a population between 5,000 and 8,000 living in hundreds of structures, which have completely perished by now. The settlement was located at the junction of the imperial road running from Cuzco to the south and a side-road leading eastward to the subtropical regions, and it was enclosed by over 1,500 storehouses with a storage capacity of roughly 10,000 m3 . On the basis of its excavated structures (a /kallanka/, part of a /kancha/, and round residential structures) and the analyzed macrobotanical and faunal remains as well as the ceramic finds, Paria was the most important production, storage, logistic, and redistribution center of the Inka Empire on the Bolivian altiplano, which maintained dynamic ethnic, economic, and administrative relations with the altiplano, the Andean Mountain, and the mesothermic valleys lying to the east.